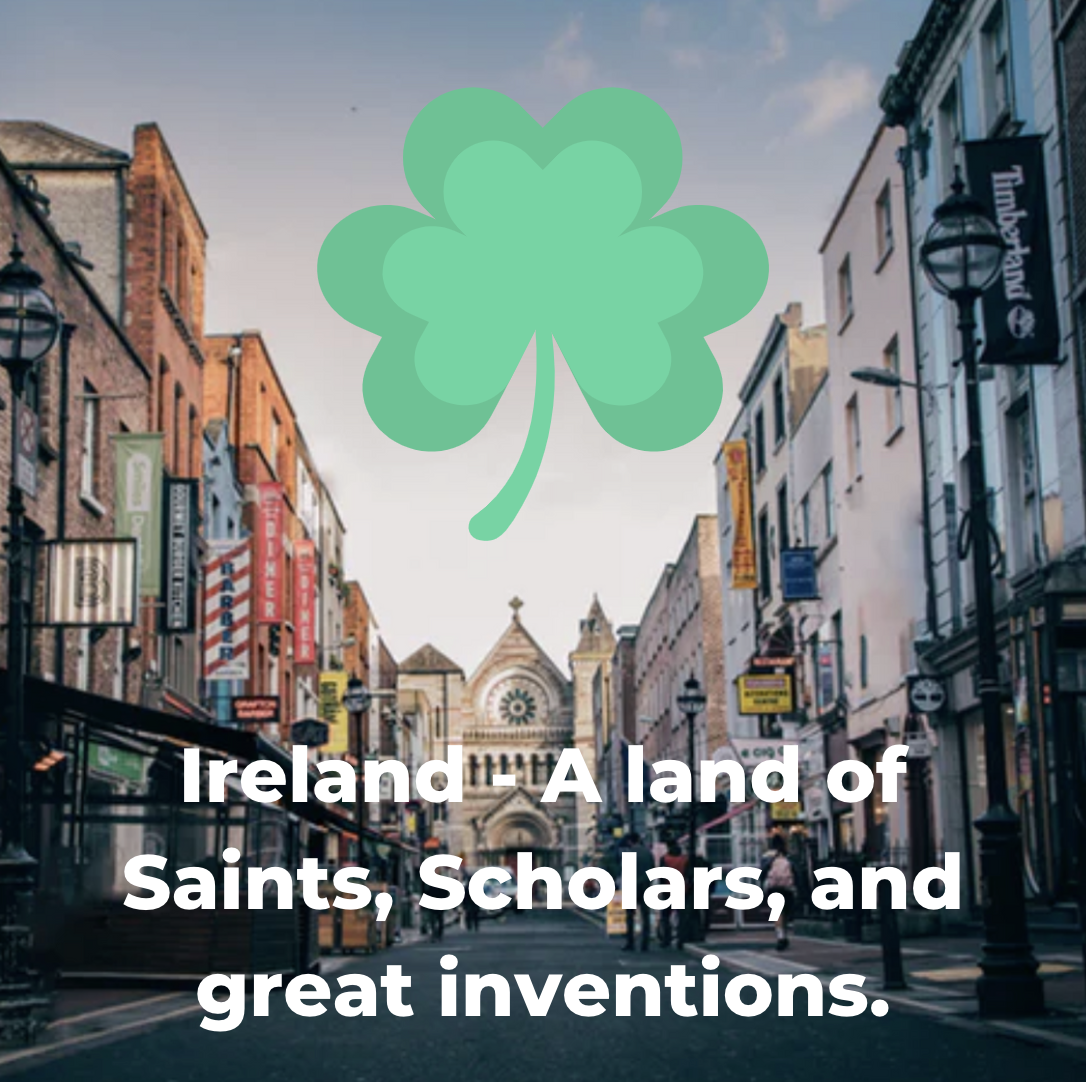 Any list of great Irish inventions would be remiss not to mention The Black Stuff. Guinness, born out of a factory with a 9000 year lease based on the banks of the River Liffey in Dublin, Ireland, is today brewed in 49 countries around the world. Guinness is one of Ireland’s most successful exports and one of the most recognisable products in the world – in fact, the Guinness Harp was one of the very first trademarks registered in the U.K (1876, almost 15 years after production began). The man behind The Black Stuff, Arthur Guinness, would be an early adopter of progressive worker’s rights offering free healthcare to his employees, paying them higher wages than competing distilleries and providing full pensions – everyone who has every lived in Dublin will fondly recall the scent of hops coming from the Guinness factory and hanging in the warm evening air of the summer, but it was Guinness’s commitment to quality and the loyalty to the employees maintaining that quality that resulted in the drink becoming a household brand, it wound it’s way into every meaningful gathering in a person’s life from births to funerals, it became a product Irish people were proud of in turn. The Irish embrace of Guinness was so strong, that when Ireland ran into trouble trying to register the state symbol (the gold harp) under international trademark law there was a conflict at hand, at which point Guinness could agree to only ever use the gold harp icon in a right facing position while the state would only ever use it in a left facing position for official state uses. The first ever Guinness book of records is said to have been published as a means to engage with pub culture and the conversations and debates taking place within them among punters.

Henry George Ferguson, known better in Ireland as ’The Mad Mechanic’ or Harry Ferguson, was a great inventor most famous for his Ferguson system of farming tractor(patented in 1909) which is a design used for basic modern tractors still. Although Massey Ferguson is arguable an international name strongly associated with farming, Harry Ferguson’s inventions didn’t begin or end there. Harry Ferguson holds the title for being the first man in Ireland to build and fly his own plane, the Ferguson Monoplane built alongside his brother from information gleaned from aviation magazines according to local legend. He was also the inventor the four wheel drive system in car racing which would go on to be used in Formula One racing. Harry Ferguson found great success in developing ploughing attachments with American colleagues Eber and George Shearman and in 1926 would patent a hydraulic system which would allow farmers to adjust the height of the plough. Credit is given to Ferguson when considering the impact of the WW2 and the huge loss of life which resulted in threats of food shortages in that he was the inventor of farming machinery which truly made work easier for the common farmer, and Ferguson would later go on to refuse his invitation for Knighthood by the Queen of England for his services to the allies during the war by pointing out that his work on the farm machinery was only ever to help the small farmer.

In the National Gallery of Ireland there hangs a painting called The Marriage of Strongbow and Aoife by world renowned painter Daniel Maclise which features a battlefield strewn with the tattooed bodies of warriors, painted in 1845 in was one of many small and quiet reminders that tattoos have been a norm in most societies forever, and yet somehow they’re still somewhat taboo today! Well, one man who went a long way in advocating for skin ink was Samuel O’Reilly, born to Irish immigrant parents in America(1954), he would go on to develop a failed invention by Thomas Edison, ’The Electric Pen’, in order to invent the modern tattoo gun to which a patent was granted in December of 1891. Hand poking or stick poking was the common western approach to tattoos before Samuel O’Reilly came along, a technique of poking the skin with a needle and joining the dots one by one to create lines, a laborious task which would now be made redundant on a professional level with the introduction of this new inking machine which increased productivity by making 50 skin perforations a second. During his lifetime, O’Reilly would ignite a massive normalisation of and advocacy for tattoos and would see a nationwide spread in the popularity of the concept, even being invited to the homes of wealthy socialites to have work done, many of whom had nicknamed him ’The Professor”.

John Joly was a truly great mind, a physicist and professor of Geology, Joly was also a great innovator and inventor. He is famed for his development of Radiotherapy used in the treatment of cancer, and for his development in uranium-thorium dating (the accurate estimation of a geological age based on radioactive elements present in minerals). Over his lifetime, Joly would write over 270 books and scientific papers, and yet somehow; we all know him today as the man who invented colour photography. Many people the world over at the time were working to capture colour photography, but not with much great success, until Joly in 1894 came up with the system of lining photography plates with numerous narrow strips in red, green and blue – The Joly Colour Screen.

Joe ’Spud’ Murphy is the one we have to thank for flavoured crisps. In 1954, Joe Murphy started his Tatyo company and set about flavouring crisps with mixes such as cheese & onion, and later, salt & vinegar. Tayto took off in such a marked way that the colloquial term for a potato crisp in Ireland IS tayto. So next time you’re tucking in to your flavoured crisps, remember it was a man from Dublin who stepped up the snack game!

This is just a small list of the many innovations which have come from Irish inventors, a list which also contains Milk of Magnesia, the submarine, the concept of electrons and boycotts, the ejection seat, nickel-zinc battery and the portable defibrillator to mention just a few. So with all of that said an done, we’d like to raise a glass to Arthur Guinness, thank Spud Murphy for being a flavour genius, and wish you all a very happy Saint Patrick’s Day. Slainte!